Bow, New Hampshire – On September 18, 2022, at approximately 6:54 PM, New Hampshire State Police - Troop D responded to the report of a multiple vehicle crash on Interstate 93 North in the town of Bow, NH. At the time of the crash, a rain storm was moving through the area causing a significant downpour of rain, making visibility poor and the roadway conditions hazardous.

Upon arrival, Troopers found multiple vehicles in both high speed and break down lanes. After gathering initial statements, it was found only one vehicle had crashed. The vehicle was identified as a gray 2006 Chrysler 300. The vehicle suffered severe damage after striking the guardrail, crossing over all lanes of traffic and striking the center median concrete jersey barrier. Once at rest, the vehicle was blocking the high speed lane. The operator of the motor vehicle was uninjured.

The left lane was shut down for approximately 1 hour for the investigation and roadway clean up, causing significant road delays.

This accident and its causing factors is still under investigation. If anyone has information regarding this incident, please contact Trooper Thomas Sandberg at (603) 227-2116 or Thomas.A.Sandberg@dos.nh.gov. 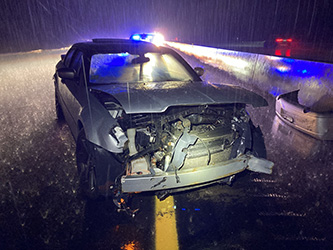 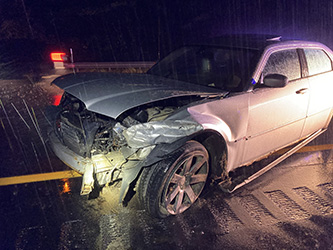 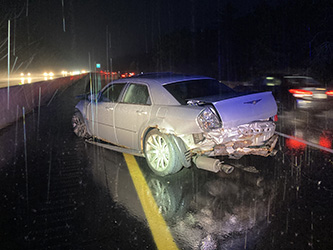