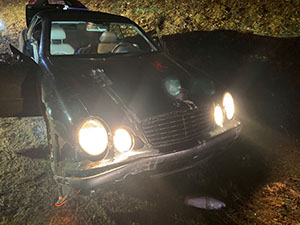 On January 1, 2022 at approximately 6:46 PM Troopers from the New Hampshire State Police Troop B Barracks in Bedford responded to the report of a hit and run motor vehicle crash along Interstate 93 North in Hooksett. Upon arrival, it was determined that a vehicle had driven off the roadway in the area of Exit #11 and struck the Exit #11 exit sign. This vehicle then reentered the roadway and sideswiped another vehicle before leaving the scene. No injuries were sustained as a result of this collision.

Approximately twenty minutes later, Troopers received reports of a second motor vehicle crash that occurred on the southbound side of Interstate 293 in the area of mile marker 10.8 in Hooksett, which is just south of the upper split with Interstate 93. Upon arrival to this crash scene, it was determined that a 1999 Mercedes Convertible had driven off the left side of the roadway where it struck the cement median barrier before swerving back across the highway and becoming disabled off the right side of the roadway. Based on crash scene evidence and a license plate that was broken off and left on scene at the first crash it was determined that this Mercedes had been the vehicle involved in both crashes. The vehicle had been operated by Philip D. Sedler (Age 62), Manchester, NH.

Mr. Sedler was evaluated on the scene of this second crash by Hooksett EMS and was determined to be uninjured. A subsequent investigation identified that the contributing factor to both of these crashes was Mr. Sedler’s impairment and he was arrested and charged with Driving While Impaired/Intoxicated and Conduct After an Accident. Mr. Sedler was released on personal recognizance bail and will be arraigned on these charges in the Hooksett District Court on February 3, 2022.

Anyone who witnessed either of these collisions or who has additional information pertaining to this incident is urged to contact Trooper First Class Francisco Vicente at Francisco.A.Vicente@dos.nh.gov, Trooper Thomas Skafidas at Thomas.W.Skafidas@dos.nh.gov, or by calling 603-271-3636.