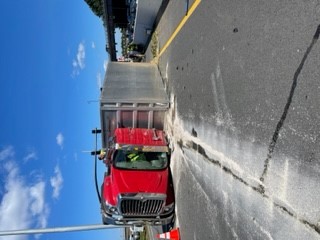 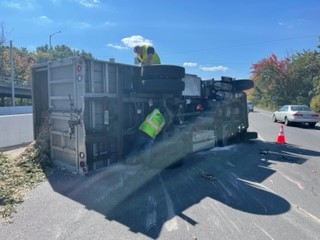 On October 8th, 2021 at approximately 11:55 AM, Troopers from the New Hampshire State Police Troop B Barracks, Troop G Barracks, Salem Police, and the Salem Fire Department responded to a dump truck rollover at the I93 exit 1 on ramp near the Rockingham Mall.

Upon arrival on scene it was determined that a Mayer Tree Service, 2018 International 7400 dump truck had lost control and tipped over onto its side in the lane of travel. The operator of truck was uninjured during the crash. The operator was identified as: John McClellan, Age 19, Haverhill, MA.

As a result of the crash, both the northbound and southbound ramps from exit 1 were shut down for over an hour while emergency personnel worked the scene and the tow trucks removed the dump truck.

Preliminary investigation indicates speed as a factor however, all aspects remain under investigation and anyone who may have witnessed the crash is asked to contact TFC M. Hicks at Malachi.M.Hicks@dos.nh.gov or 603-223-8836.