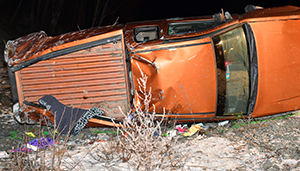 On Sunday, December 05, 2021 at approximately 6:40 P.M., Troopers from New Hampshire State Police-Troop F and Littleton Police Department responded to a motor vehicle crash in the area just south of Exit 44 on Interstate 93 northbound in the Town of Littleton.  It was determined that a 2004 Chevrolet Pickup, operated by 36 year-old Jordan Couture of Milton, Vermont, was traveling north on Interstate 93 when he lost control of his vehicle, left the roadway to the left side of the road, entering the median.  The vehicle began to slide sideways and eventually began rolling over, ejecting two of the passengers.  Couture was transported to Littleton Regional Hospital with minor injuries he sustained in the crash. The two juvenile female passengers in the vehicle sustained fatal injuries and were pronounced deceased at the scene.

Due to the seriousness of the crash, the New Hampshire State Police Collision Analysis and Reconstruction (C.A.R.) Unit, responded to the scene and assumed control of the investigation.

All aspects of this crash remain under investigation including causation.  Anyone that may have further information related to this crash, please contact Trooper First Class Daniel Quartulli at 603-223-8993 or email at daniel.r.quartulli@dos.nh.gov.