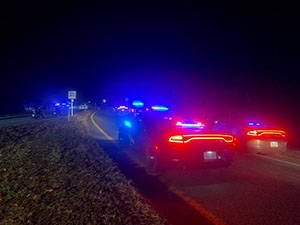 On November 14, 2021 at approximately 4:33 pm, Troopers from the New Hampshire State Police Troop A and E Barracks’ along with Rochester Police, Rochester Fire and EMS, responded to the report of a single motorcycle crash involving a 2016 Harley Davidson, Color: Black.

The crash occurred on the westbound side of the Route 202 connector to the Spaulding Turnpike in the area of Exit 16 in the town of Rochester, NH. The on scene investigation revealed the operator and sole occupant of the motorcycle, Robert J. Dow, Age 49, Rochester, NH, lost control of his motorcycle after striking the raised curb median of the Route 202 connector. As a result of the crash, Dow was ejected from his motorcycle and sustained fatal injuries.

All aspects of this crash remain under investigation by New Hampshire State Police and anyone who may have witnessed the crash is asked to contact Trooper A. Baumbach at Alison.J.Baumbach@dos.nh.gov or 603-323-3333.