On November 14, 2021 at approximately 10:02pm, Troopers from the New Hampshire State Police Troop B Barracks along with the Merrimack Fire and EMS, and members of DOT responded to the scene of a multiple vehicle crash on the F.E. Everett Turnpike in Merrimack, NH. Of note a 2012 Chrysler 300, 4-Door Sedan, Color: Silver, Was impaled by approximately eight feet of railing. The crash occurred on the mainline in the area of mile marker 8.8 in Merrimack, NH. Troopers’ investigation revealed the operator and sole occupant of the vehicle as Jonathan Gouveia, Age 43, Loudon, NH, Was traveling northbound and reportedly lost control of his vehicle when another unknown vehicle moved into his lane of travel. Gouveia lost control of his vehicle and collided with the guardrail on the right side of the road which then sent him across the roadway into the center median where his vehicle then struck the monorail dividing the northbound and southbound lanes. Gouveia’s vehicle was impaled by approximately 8 feet of the railing.

During the collision with the monorail, a segment, approximately 12 feet long, was detached and projected across the southbound travel lanes where it was struck by an additional five vehicles rendering them disabled. Gouveia was treated and released from the scene with only minor injuries. None of the other motorists involved in this event reported injuries.

The left lane of both the northbound and southbound lanes were closed for approximately 2.5 hours while DOT made repairs to the guardrail. The vehicle was removed from the median by Lewis Towing.

All aspects of this collision remain under investigation and anyone who may have witnessed the crash is asked to contact Jacob Winslow at Jacob.A.Winslow@dos.nh.gov or 603-223-4381. 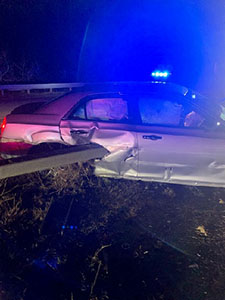 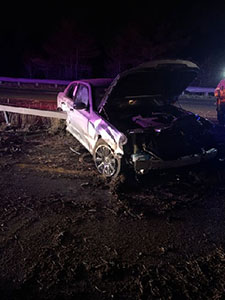 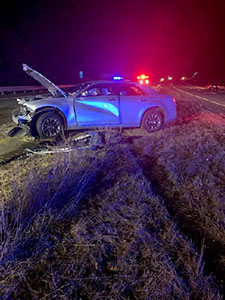