Hooksett, New Hampshire – On Sunday, September 18, 2022 at approximately 8:13 PM, Troopers from New Hampshire State Police Troop D Barracks were notified of a motor vehicle crash on Interstate 93 North in the town of Hooksett, NH. At the time of the crash, a heavy rain storm had moved through the area causing a significant downpour of rain, making the roadway conditions hazardous, due to pooling water on the roadway.

Upon arrival Troopers located a white, 2005 Audi Q5 suffering disabling damage in the middle lane of the open road and cash tolls lanes. Roadside investigation revealed the operator of the white Audi was operating his vehicle at a rate of speed, too fast for the existing road conditions when he hydro-planed and lost control of his vehicle. The Audi struck the guardrail and went across multiple lanes of traffic when it struck a tractor trailer unit. The tractor trailer unit suffered a severed diesel tank and diesel fuel leaked over a few hundred yards of roadway and multiple lanes.

Upon removing vehicles from the roadway, New Hampshire Department of Environmental Services and Bauchman’s Towing Inc. responded to the scene to manage the hazardous material spill.

This was an extensive scene requiring response from many entities. There was a secondary crash in traffic created by the initial crash, in which no injuries were reported. Two lanes of traffic were shut down for approximately six hours to support the clean-up of this scene. The operator of the Audi was cited for violations at the scene.

This crash still remains under investigation. If anyone has information regarding this incident, please contact Trooper Thomas Sandberg at (603) 227-2116 or Thomas.A.Sandberg@dos.nh.gov. 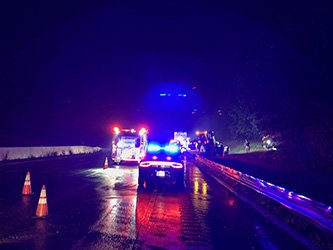 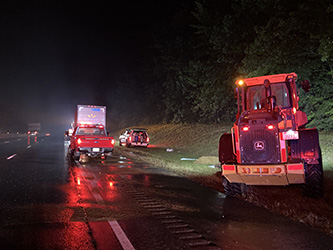 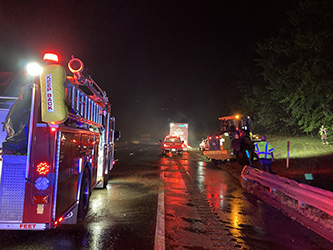