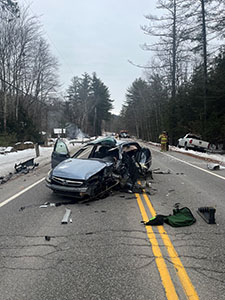 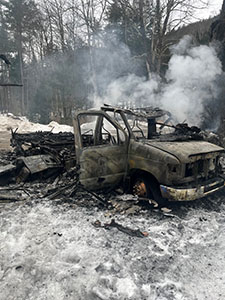 On Monday January 3, 2022 at approximately 11:43 A.M. New Hampshire State Police Troop D was requested to respond to a report of a two vehicle collision in the area of 875 Route 3A in the town of Hill, New Hampshire. Upon arrival, emergency personnel discovered a Honda Accord in the middle of the roadway with significant damage. The second vehicle involved was an E-350 motor home which caught on fire and was fully engulfed in flames on the side of the road after the collision.

The lone operator of the Honda Accord was entrapped within the vehicle and needed to be extricated by the Bristol Fire and the Hill Fire department. The operator was transported to Concord Hospital for serious bodily injuries.

The lone operator of the E-350 motor home was able to self-evacuate the vehicle before it became fully engulfed. The operator was transported to Speare Memorial hospital after suffering some burns and smoke inhalation.

Based upon the initial investigation, the Honda Accord was travelling southbound on Route 3A and for an unknown reason, drifted over into the northbound lane into the path of oncoming traffic. The E-350 motor home was travelling northbound on 3A and swerved in an attempt to avoid a collision. Unable to do so, the vehicles collided with one another and the E-350 motor home drove off the roadway to the left hand side after the initial impact and then caught on fire.

At this time all aspects of this crash remain under investigation. The names and addresses of the individuals involved are not being released at this time due to the ongoing investigation. Anyone that may have further information related to this collision, or who witnessed this collsion are encouraged to contact Trooper Matthew Field at 603-223-3792 or email him at Matthew.N.Field@dos.nh.gov.