Upon arrival it was determined that a 2009 Pontiac G6 was traveling westbound on Interstate 393, negotiating the Interstate 93 South on ramp when the vehicle left the left side of the roadway, rolling over multiple times before it came to rest on the embankment of the ramp. At the time of the crash, there were four occupants of the vehicle; two were able to self-extract from the vehicle, one was ejected and another was entrapped within the vehicle. Concord Fire and arrived on scene and extracted the passenger from the vehicle. As a result of the crash, all four occupants of the Pontiac G6 were transported to Concord Hospital with serious injuries; their identities are being withheld at this time.

At the request of the New Hampshire State Police Troop D, the Collision Analysis & Reconstruction (C.A.R.) Unit responded to the scene to assist with the investigation. Troop D was assisted on scene by Concord Fire and EMS, Concord Police Department and New Hampshire Department of Transportation. The ramp from Interstate 393 West to Interstate 93 South was shut down for approximately six hours to complete the roadside investigation.

All aspects of the collision remain under investigation and anyone who may have witnessed the crash or the events leading up to the crash are asked to contact Trooper Conor Davis at Conor.K.Davis@dos.nh.gov or (603) 223-6108. 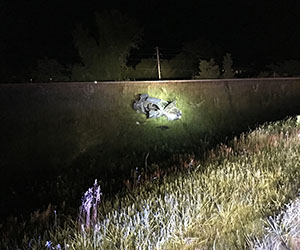