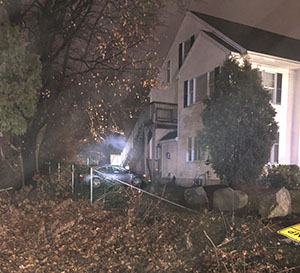 On January 1, 2022 at approximately 4:34 PM Troopers from the New Hampshire State Police Troop B Barracks in Bedford responded to the report of a motor vehicle crash on the F.E. Everett Turnpike North Exit #5E off-ramp in the city of Nashua. This crash was reported as a vehicle that had struck a building.

Upon arrival it was determined that a juvenile male operator had been driving a 2011 Nissan Maxima when he attempted to take Exit #5E from the F.E. Everett Turnpike North. The driver was unable to navigate the right curve of the ramp and exited the roadway where he crashed through a chain-linked fence and a large boulder before striking the building located at 187 Main Dunstable Road. This building and its surrounding property were unoccupied at the time of this crash.

The operator sustained minor injuries and was transported to a local hospital as a precaution. The crash investigation determined that the contributing factor to this crash was the operator’s speed and negligent driving. The State Police was assisted on scene by members of the Nashua Police and Fire Departments.

Anyone who witnessed this collision or who has additional information pertaining to this incident is urged to contact Sergeant Jacob Wood at Jacob.A.Wood@dos.nh.gov or by calling 603-223-8530.