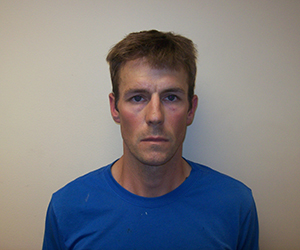 On 10/06/2021, NH State Police- Troop D Barracks received a report for a hazardous operator, reported in a Red BMW, traveling Interstate 89 South in New London. The vehicle was reported to be traveling at a high rate of speed, weaving in and out of taffic and passing vehicles in the breakown lane.

Tr Scholand observed the vehicle pass him I89 South in Warner traveling at a rate of 94 MPH. Initial observations showed that the suspect had taken Exit 9 and got back on the Interstate in attempts to elude police response. Tr Scholand was ultimately able to catch up to the vehicle I89 south Hopkinton and had observed him passing multiple vehicles, still traveling at a high rate of speed.

Once caught up to the vehicle, the vehicle refused to pull over, and a pursuit ensued. The vehicle plate was unreadable due to a tinted plate cover, but was ultimately identfied as: 2016 Honda Accord, Color Red.

Tr Scholand continued to pursue the suspect vehicle as it continued to drive erratically. Troopers were able to utilize tire deflation devices at mile marker 2 in Bow, which were successful in deflating one of the vehicles tires. The suspect took Exit one where he drove through the intersection at Logging Hill Rd and crashed into a stop sign on Tyler Rd in Bow. The suspect was taken into custody without incident. He was identified as: Jeffrey Dennis, DOB: 01/09/1986.

Dennis was the only occupant in the vehicle. He is being charged with Reckless Conduct with a deadly weapon, Reckless Operation, Disobeying a Police Officer, Speed and Failure to Yield to a Stop Sign. Dennis was deemed to have violated his parole status and was ordered to be held in the custody of the State. He was transported to the State Prison.

There were no injuries as a result of the crash.

Anyone with information regarding the vehicle pursuit to contact Trooper Jared Scholand at 603-227-2159 or via email at jared.t.scholand@dos.nh.gov.