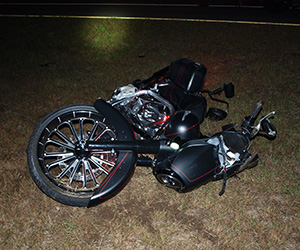 Rochester, New Hampshire – On September 17, 2022 at approximately 8:30 PM, troopers from the New Hampshire State Police Troop A Barracks, along with emergency medical personnel from the Rochester Fire Department, responded to a report of a crash involving a single motorcycle on the Spaulding Turnpike Connector near the northbound exit 16 off-ramp from Route 16. The motorcycle was a 2016 Harley-Davidson traveling westbound on the connector when it crossed the centerline and went off the roadway on the eastbound side.

Both eastbound and westbound traffic on the connector had to be shut down for approximately two hours while the crash scene was investigated. New Hampshire State Police were assisted at the scene by the Rochester Fire Department and the New Hampshire Department of Transportation.

The operator of the motorcycle has been identified as Kevin Komosa, age 41, of Whately, MA. On September 18, 2022, Mr. Komosa passed away at Frisbie Memorial Hospital from injuries sustained in the crash.

The passenger has been identified as Ashley Culver, age 28, of Buckland, MA, and she remains in serious but stable condition.