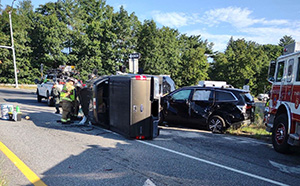 Nashua, New Hampshire – On August 8, 2022 at approximately 7:35 AM, Troopers from the New Hampshire State Police Troop B Barracks in Bedford responded to the report of a rollover motor vehicle crash involving multiple vehicles on the F.E. Everett Turnpike Northbound Exit 4 off-ramp in Nashua.

Upon arrival, Troopers determined that a gray F-150 being driven by Melanie Everett (Age 51) of Greenfield, NH was traveling on the off-ramp when she struck a black Honda Pilot being operated by Eileen Aponte (Age 51) of Lawrence, MA as she was stopped at the intersection with East Dunstable Road. The gray F-150 then overturned and came to final rest on its side after impact. Additionally, as a result of the initial impact, the black Honda Pilot was forced into the rear of a white Ford Super Duty pick-up truck being operated by Matthew Milano (Age 29) of Tewksbury, MA while he was also stopped at the red light.

Melanie Everett and Eileen Aponte were both transported to the Southern New Hampshire Medical Center with non-life threatening injuries. Matthew Milano was uninjured.

A portion of the F.E. Everett Turnpike Northbound Exit 4 off-ramp was shut down for approximately 1 hour during this incident. All aspects of the crash are being investigated. Anyone with information regarding the crash is being asked to contact Trooper Vazquez-Castro at (603) 227-4398 or Jordan.D.Vazquez-Castro@dos.nh.gov.