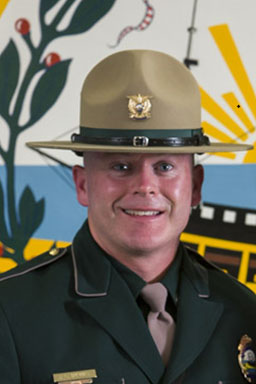 At approximately 12:33 AM this morning, a 9-1-1 caller reported a serious motor vehicle crash involving a tractor trailer unit and a State Police cruiser on Interstate 95 northbound, just north of Exit 3. Staff Sergeant Sherrill was transported to Portsmouth Regional Hospital where he succumbed to injuries sustained in the crash.

“Staff Sergeant Sherrill was known as a ‘trooper’s trooper,’ a consummate, dedicated professional and a true family man,” said Colonel Nathan A. Noyes of the NH State Police. “For nearly 20 years, he served the State of New Hampshire with honor and pride.”

The NH State Police asks that Staff Sergeant Sherrill’s family be given privacy as they process their tragic loss and begin the grieving process.