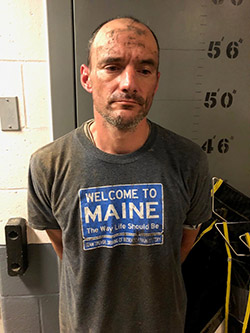 Hampton Falls, New Hampshire – On June 23, 2022 at approximately 6:00 AM, Troopers assigned to the New Hampshire State Police Troop A barracks were notified that a vehicle had just been stolen from a residence in Hampton Falls. Witnesses were able to provide responding Troopers with a probable location of the stolen vehicle. A short time later, Troopers observed the vehicle abandoned on Interstate 95 Northbound in the Town of Hampton Falls.

A State Police K-9 Unit was called to assist in the search for the suspect. After a brief search, the suspect was located hiding in the woods a short distance from the highway.  He was taken into custody without further incident.

The suspect was identified as Anthony Bizzocchi, age 42, from Eliot, ME.

The right lane of Interstate 95 Northbound was closed in this area for approximately 1.5 hours as Troopers continued their investigation.

All aspects of this case remain under investigation.  State Police is requesting that anyone who may have information pertaining to the incident to please contact the investigating trooper, Trooper Petros Lazos, at Petros.Lazos@dos.nh.gov.