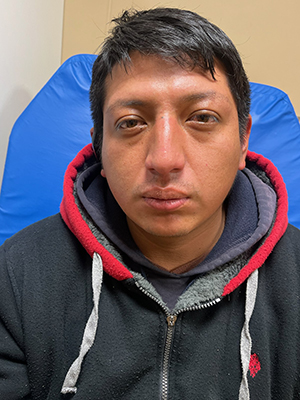 Tilton, New Hampshire – On November 29, 2022 at approximately 10:51PM, Trooper Erin Frost of the New Hampshire State Police Troop D barracks was monitoring traffic on Interstate 93 in the town of Tilton. While doing so, she observed a vehicle approaching her location at an extremely high rate of speed. Trooper Frost obtained a radar reading of 116 MPH as the vehicle approached and passed her. After stopping the vehicle, Trooper Frost identified the operator as Freddy Morocho-Carchi, Age: 25, Milford, MA.

After a roadside investigation, Trooper Frost placed Morocho-Carchi under arrest. Morocho-Carchi was transported to the Tilton, NH Police Department, where he was bailed and released on his own personal recognizance.

Morocho-Carchi was charged with Aggravated Driving Under the Influence, Open Container, Operating without a Valid License and Reckless Operation and was ordered to appear in the Franklin District Court at a later date.