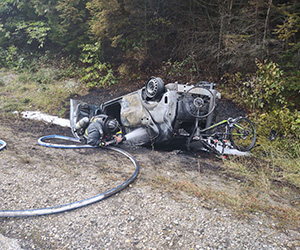 Warner, New Hampshire – On September 18, 2022, at approximately 11:27 AM, Troopers from the New Hampshire State Police - Troop D barracks responded to the scene of a single motor vehicle crash on Interstate 89 South in the Town of Warner, NH.

The operator, Zachary Brock, 41 of Warner, NH was driving a 2013 Toyota Prius when he began experiencing a medical event. This resulted in the vehicle veering to its left and striking the guardrail numerous times.

As a result the operator lost control, veered to the right, driving off the road, striking an embankment where the vehicle rolled over and caught on fire. Brock was pulled from the fiery crash by numerous good Samaritans who had stopped prior to the New Hampshire State Police arriving on scene. The lone operator was transported to Concord Hospital for injuries he sustained.

If anyone has information regarding this incident, please contact Trooper Ryan St. Cyr at (603) 223-8941 or Ryan.T.StCyr@dos.nh.gov.