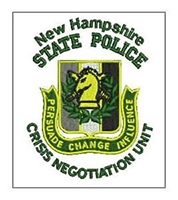 The New Hampshire State Police Crisis Negotiation Unit is used to diffuse potentially life-threatening situations through the use of proven verbal crisis management techniques. Unit members are geographically located throughout the state to allow for a quick response to situations no matter where they occur. The Crisis Negotiation Unit can be activated without having to activate the SWAT Unit and can be used to assist agencies in many types of crisis incidents where specialized training is needed.

Since its inception, the Crisis Negotiation Unit has responded to well over 100 calls for service that have ranged from hostage situations to subjects who are suicidal and barricaded. Several of those calls have resulted in national media coverage, to include the hostage taking at the Hillary Clinton Campaign Office in Rochester and the standoff and capture of a triple homicide suspect who was also the target of the state’s first AMBER alert in Gilsum. As a result of the success of the CNU, members have traveled and presented call reviews and training for numerous organizations across the country.

Unit members have attended training heavily weighted in scenario-based exercises. To ensure that the training is as realistic as possible, civilian actors and members of other negotiation units have participated.

The Crisis Negotiation Unit (CNU) responded to 11 calls for service in 2014. The nature of the calls ranged from suicidal and barricaded subjects to a subjected that had murdered a police officer and then barricaded himself. The CNU's highlights during 2014 included but were not limited to peacefully negotiating the end of a standoff in Hampton Falls with armed suspects who were wanted in Massachusetts. Also, peacefully negotiating an end to a standoff with suspects wanted on drug warrants in the Town of Ossipee.

During 2014 CNU members collectively attended approximately 320 hours of training. The CNU also hosted, for the first time in New Hampshire history, the annual CNU New England State Police Administrators Conference. The CNU was honored to have presenters from around the country at the NESPAC conference. As well, the CNU presented at the New England Crisis Negotiators Annual Conference.