Headquartered at the James H. Hayes Safety Building in Concord, the Division of State Police operates from seven Troop Stations around the State, in addition to a Marine Patrol facility and State Office Complex Police Force at New Hampshire Hospital — all of which provides a visible law enforcement presence across New Hampshire.

On July 9, 1869, a typical summer day in New Hampshire, Governor Stearns was presented with a hand written piece of legislation that would eventually lead to the formation of the New Hampshire State Police.

The legislation, entitled "An Act to Create a State Police in Certain Cases," outlined just what would constitute the proposed State Police. During this historical period, the various local law enforcement authorities chose not to promote compliance with the liquor laws. Therefore, one of the primary functions of the proposed legislation was the enforcement of these "anti-drinking" laws by the State Police.

The proposed legislation failed to achieve the needed backing of two-thirds of the male voters in New Hampshire. Fortunately, this setback did not diminish the interest and support of a large portion of the population of New Hampshire to have a State Police. The interest in such an organization was responsible for the formation of a State Police Commission. The "Report of State Police Commission to the Legislature" was presented to the January 1931 session of the legislature.

It formulated a comprehensive justification for the necessity of establishing a "State Police" and noted that "… today, with the development of a network of improved highways and the universal use of the automobile, a problem of law enforcement and criminal apprehension has been created for which the established system of local protection had proved inadequate." The Commission also suggested that the need for criminal investigators become a reality and recommended the creation of a State Detective Bureau. Up to that point in time, most State (and Country) criminal investigations were performed by private detective agencies. A final recommendation by the State Police Commission was concerned directly with the establishment of a Bureau of Records and Identification within the Department of State Police. In reference to this, criminal statistics, fingerprint taking and other methods of identification would be undertaken. The Bureau would also maintain records of revolver purchases and revolver permits issued within the State.

Bill No. 254, entitled "An Act Creating A Department of State Police" did not easily pass through the legislative process and found itself subjected to many amendments, readings and voting sessions. Ultimately, on June 29, 1937, the New Hampshire State Police was created and subsequently became a statutory reality as Chapter 134 of the Laws of New Hampshire. According to this statute, the law became effective July 1, 1937. The New Hampshire State Police became the 15th organization of its type in the United States.

During the first year of 1937, the New Hampshire State Police established its headquarters in the State House. At that time, the initial ranks were comprised of individuals who had been members of the uniformed branch of the New Hampshire Motor Vehicle Department and criminal investigators then employed through the State Attorney General’s office. The first Superintendent of the Department of State Police was George Colbath, the Sheriff of Coos County.

During 1937 the complement of troopers reached an authorized forty-eight men. These men would serve as the benchmark to what has become a tradition of law enforcement service reaching national acclamation. These volunteers were not ordinary individuals in any realistic view. Rather, they were truly a special breed, willing to endure long, arduous tours of duty, meager compensation and incredible personal risks. As the first New Hampshire State Troopers, they established an esprit de corps, a philosophy, and a total way of life that has transcended time and the evolution of social values. Their commitment to excellence without compromise has become the foundation for the proceeding years. 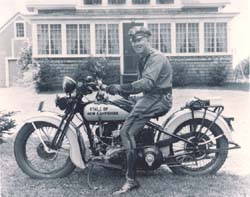 Harley Davidson motorcycles and a few Chevrolet sedans were the primary modes of transportation utilized by the early troopers. There were five Troops for uniformed operations, and General Headquarters included administration, criminal identification, traffic, and teletype bureaus.

Since its inception, the New Hampshire Division of State Police has experienced constant growth and expansion in all areas of endeavor. This growth includes an increase of sworn personnel to approximately 400 and the creation of a number of highly sophisticated and specialized units.