Bedford, New Hampshire – On August 8, 2022 at approximately 11:06 PM, Troopers from the New Hampshire State Police Troop B Barracks in Bedford responded to a report of a rollover involving a passenger van on Interstate 293 Southbound in the area of mile marker 3.4.

Upon arrival, Troopers determined that a white Ford Transit Van being driven by: Liviu Daescu, Age: 60, Manchester, NH, was traveling southbound in heavy rain when he began to hydroplane. Daescu reportedly lost control of his vehicle and collided with the guardrail on the left side of the road. The van then overturned and landed on its side in the middle of the highway where it blocked the left two lanes. The highway was shut down briefly while emergency personnel arrived on scene. The southbound side was closed for approximately 15 minutes until the right lane could be cleared. The remaining two left lanes were closed for approximately one hour while the van was lifted back upright and removed from the highway.

An additional passenger of the van was transported to the Elliot Hospital with minor injuries while the driver was uninjured. There were only two occupants in the van at the time of this crash.

Troopers at the scene were assisted by the Bedford Fire Department.

Speed and weather conditions are believed to be contributing factors in this investigation however; all aspects of the crash are being considered. Anyone with information regarding the crash is being asked to contact Trooper Riley LaCroix at (603) 223-8952 or Riley.J.LaCroix@dos.nh.gov. 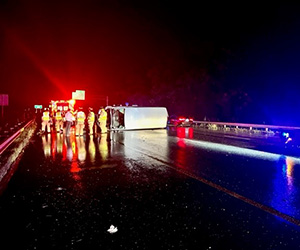 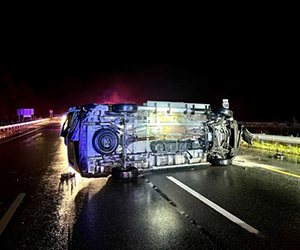 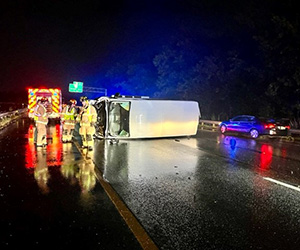