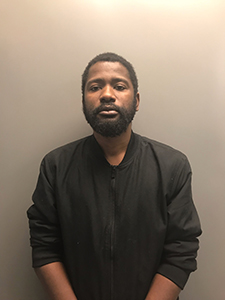 On February 23, 2022, members of the New Hampshire State Police, Troop G – Investigations Unit arrested Nesly Percy, 34, of Manchester, New Hampshire. Investigators had received information that Percy had submitted a motor vehicle title to the Division of Motor Vehicles with the intent to conceal or misrepresent its identity. Further investigation revealed that the motor vehicle had previously been reported stolen.

Investigators obtained both a search warrant for Percy’s residence along with a warrant for his arrest. Percy was taken into custody at his residence without incident. He was charged with Title Fraud, Concealing the Identity of a Vehicle, Receiving Stolen Property, Unsworn Falsification and Tampering with Public Records and Information. He will be arraigned in the Merrimack Superior Court on March 17th, 2022 at 1:00pm.

The New Hampshire State Police Troop G – Investigations Unit is comprised of highly skilled Troopers who are assigned to the Division of Motor Vehicles. They have received specialized training in the detection of fraud and fraudulent documentation and are often called upon for their expertise in this area.

Anyone with information is encouraged to contact Trooper First Class Craig Gagne at (603) 223-8778 or by email at craig.d.gagne@dos.nh.gov.