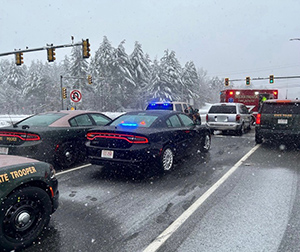 Merrimack, New Hampshire – On January 23, 2023 at approximately 1:30 PM, New Hampshire State Police Troop B Dispatch began receiving multiple reports of a wrong-way driver in the area of mile marker 7.4 on Interstate 293 in the City of Manchester, NH. Witnesses reported a minivan traveling the wrong way, southbound in the northbound lanes. Troopers from the Troop B Barracks responded to the area, first encountering the vehicle on the F.E. Everett Turnpike in the area north of the Bedford Toll Plaza traveling southbound in the northbound lanes. The operator of the suspect vehicle disregarded the emergency signals of a responding Trooper, continuing to travel the wrong way on the F.E. Everett Turnpike. As the suspect vehicle's location was relayed, Troopers coordinated rolling roadblocks to protect the motoring public from the wrong- way driver. Additional witnesses advised that the suspect vehicle had corrected its direction by traveling onto the southbound side of the F.E. Everett Turnpike. The suspect vehicle was then located off of Exit 11 and then on Continental Boulevard in the Town of Merrimack, NH. Responding Troopers successfully stopped the suspect vehicle and made contact with the operator who was identified as David J. Coburn, Age: 84, Goffstown, NH.

Upon making contact with Coburn, Troopers identified that he was experiencing a medical emergency. Coburn was subsequently transported to St. Joseph's Hospital for evaluation and treatment. The New Hampshire State Police was assisted in this incident by Merrimack Fire Department and Merrimack Police Department. The investigation of this incident is ongoing. Trooper Moran is handling the investigation and anyone with information pertaining to the incident contact him at (603) 223-4381 or by email at William.J.Moran@dos.nh.gov.