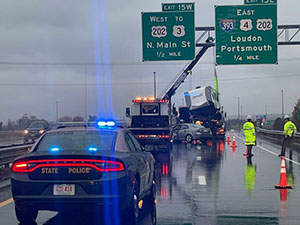 On 11/12/21 at approximately 1117 hours, NH State Police received a call, of a motor vehicle crash on I-93 NB, exit 14 in the City of Concord. Once on scene, State Police determined I-93 NB would be shut down for an undetermined amount of time. The preliminary investigation revealed unit 1 (sedan) was traveling northbound in the right lane and attempted to move to the left lane. During this time unit 1 began to hydroplane due to the heavy rain. Unit 1 hydroplaned back into the right lane and crashed into a camper being towed by unit 2 (pickup truck). As a result of unit 1 crashing into the camper, the camper rolled over across both lanes of I-93 NB shutting the highway down. Traffic was diverted off exit 14 for a short time.

NHSP/D was assisted on scene by Concord Fire and NHDOT. The highway reopened to one lane as the scene was being cleared. This crash is still under investigation. Anyone with information pertaining to the crash can contact: TFC- D. Livingstone 603-223-4381 or via- Daniel.J.Livingstone@dos.nh.gov.