Merrimack, New Hampshire – On September 20, 2022, at approximately 8:50 AM, Troopers from the New Hampshire State Police Troop B Barracks and the Collision Analysis & Reconstruction (CAR) Unit, along with Officers from the Merrimack Police Department and Personnel from the Merrimack Fire Department responded to the report of a multi-vehicle crash on the F.E. Everett Turnpike near mile marker 14.8 in the town of Merrimack, NH.

Upon arrival, investigating Troopers located a, 2013 Hyundai Sonata, Color: Silver, in the median, heavily damaged and impaled by a guardrail, entrapping the driver and sole occupant of the vehicle that was later identified as: Sean McConnell Age: 32 Manchester, NH.

McConnell was pulled from the wreckage by members of the Merrimack Fire Department as they utilized the Jaws of Life to remove the roof from the vehicle in order to get McConnell free. McConnell was then transported to the Elliot Hospital in Manchester, NH with serious life threatening injuries.

Troopers also discovered the crash involving McConnell caused large pieces of the guardrail to be forced into the northbound side of the F.E. Everett Turnpike causing a multi-vehicle pileup in that same area. The F.E. Everett Turnpike was completely closed for about ½ hour as personnel assessed for injuries and cleared the highway before the roadway was opened back up to one lane, both north and south for approximately 3 hours as members of the New Hampshire State Police Troop B and CAR Unit worked to document and process the scene.

Speed appears to be a factor in the crash however, all aspects remain under investigation.

State Police is requesting that anyone who may have witnessed the incident, passed through the scene with a dash camera, or witnessed any driving behaviors prior to the crash to contact Trooper Ryan Hajjar Ryan.J.Hajjar@dos.nh.gov or by voicemail at (603) 223-8760. 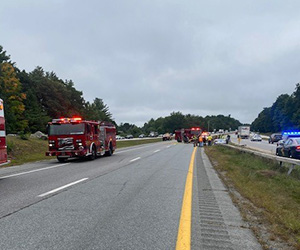 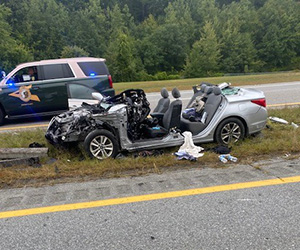 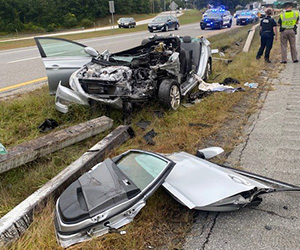