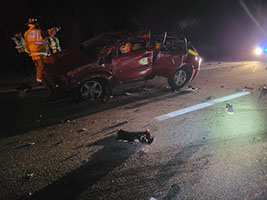 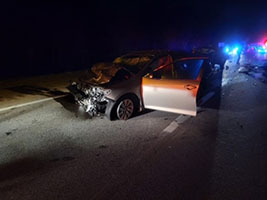 On November 21, 2021 at approximately 2:13 AM, Troopers from the New Hampshire State Police Troop A Barracks responded to a report of a motor vehicle crash on Interstate 95 Northbound in the town of Greenland, NH.

Preliminary investigation revealed that Unit #1, identified as a 2006 Chevrolet Equinox, was involved in a previous rollover collision. Unit #2, a 2014 Toyota Camry, struck Unit #1 which was disabled and resting on its’ side in the left travel lane of Interstate 95.

Several witnesses reported that the operator of Unit #1 fled the scene on foot, heading east into the woods on the side of I-95N. The operator was described as a Hispanic male wearing a black jacket with a fur-lined hood. The operator of Unit #2, identified as Omar Sowamrah, age 26, of Portland, ME, sustained serious but non-life threatening injuries. A passenger in Unit #2, identified as Forqan Abdulaziz, age 25 of Westbrook, ME, sustained minor injuries in this collision. Both individuals were transported to Portsmouth Regional Hospital for treatment. A State Police K-9 Unit was called to assist and began to search the surrounding area but was unsuccessful in locating the operator of Unit #1.

The left 2 lanes in the area of this collision were closed for approximately 1½ hours.

All aspects of this crash remain under investigation and anyone who may have witnessed the crash or has information pertaining to the operator of Unit # is asked to contact Trooper Matthew S. Bailey at Matthew.S.Bailey@dos.nh.gov or 603-223-4381.