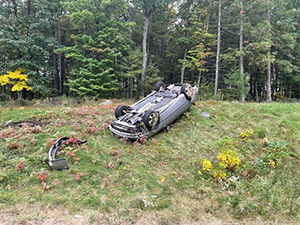 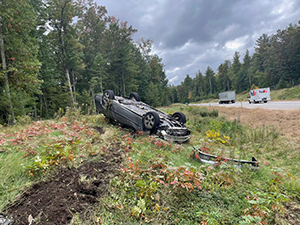 On October 11, 2021 at approximately 1:35 PM, Troopers from the New Hampshire State Police Troop B Barracks in Bedford responded to a rollover motor vehicle crash on the F.E. Everett Turnpike Southbound Exit #13 off-ramp in the town of Bedford. Upon arrival they found that: Dennis A. Smith (Age 62), of Manchester, NH, had been operating a 2002 gray Saab 9-3 Convertible when he lost control and exited the left side of the roadway where his vehicle rolled over and came to rest on its roof. Mr. Smith sustained serious but non-life threatening injuries and was transported to the Elliot Hospital for treatment. State Police was assisted on scene by Bedford Fire and Medical personnel and the left lane was closed for approximately one hour.

Speed appears to be a factor in this crash, however, all aspects remain under investigation. Anyone with information pertaining to this incident is urged to contact Trooper First Class Francisco Vicente at Francisco.A.Vicente@dos.nh.gov or 603-223-8745.