The Special Events Response Team (SERT) consists of Troopers extensively trained in riot control formations and mobile field tactics. The New Hampshire State Police SERT was formed in the late part of 2003 for a variety of reasons. Consideration was given to increased terrorism activities and potential protests over military conflicts. Also, the location of the 2004 Democratic National Convention in Boston increased the need for regional effectiveness in crowd control tactics. 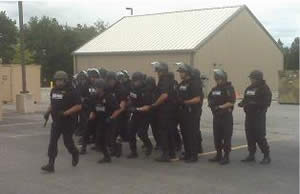 The mission of the Special Events Response Team is to assist with large crowds or disturbances. Events include protests, large gatherings, prison alerts and large-scale searches in which manpower is needed to respond in a rapid manner. SERT is utilized during the annual Laconia Classic Motorcycle Rally, monitoring approximately 200,000 people, and during the NASCAR Races, monitoring approximately 100,000 people. The Team also assists colleges with sporting event celebrations, such as those associated with the Major League Baseball World Series and Super Bowl; efforts are concentrated in the towns of Durham, Keene and Plymouth.

SERT has been involved in the search for several missing individuals, working closely with the Fish and Game Department. Additionally, SERT has trained with members of the County and State Correction Departments and is able to augment their units during prison disturbances.