The Special Weapons and Tactics (SWAT) Unit was formed in 1971 under the direction of State Police Colonel Joseph Reagan. 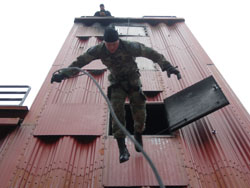 At the time, the unit was comprised of eight highly trained troopers, with expertise in weaponry and specialized tactics such as rappelling and building assaults. The purpose of the SWAT Unit is to be able to respond to high-risk incidents such as barricaded suspects, hostage takers, high-risk warrant service, active shooter situations and executive (VIP) security, as well as other incidents in which the lives and safety of the public are in extreme danger. The number one mission of the Special Weapons and Tactics Unit is to save lives and reduce risk to the citizens of the state.

The danger faced by SWAT members was never so closely felt as with the tragic loss of Sergeant James Noyes in 1994.  Sergeant Noyes was serving as a SWAT member at a unit activation in Gilford, attempting to resolve a barricaded suspect situation involving an armed suicidal suspect.  Sergeant Noyes was fatally shot and killed by the suspect, leaving behind a wife and three children.  Today, the SWAT Unit carries the spirit of Sergeant Noyes and proudly displays his State Police call-sign "502" on all SWAT insignia.

The SWAT Unit continues to train New Hampshire state, county, and local police officers in the "Response to Active Shooter" program, which instructs on the tactics relative to responding to on-going, life-threatening active shootings.